REVIVING THE ART OF MOSAIC

Irene Syrianou was born in 1970 and she grew up between the islands of Mykonos and Delos.

She worked on Delos for 10 years. It was on this island that she familiarized herself with the mosaics arts.

She touched them, and they in turn touched her.

In her spare time on the island she was able to learn the craft of Mosaic Arts,while simultaneously raising her daughter Georgia Kouka.

Her daughter has a degree in athletic journalism and is a teacher of Pilates.

The Experience on Delos gave her the necessary knowledge to be able to make ancient reproductions as well as the contemporary work that she creates. Her teacher at the time was the mosaic artist and restoration specialist Nikos Tolis.

Since 2001 she has maintained a workshop and retail space for mosaics near the Waterfront of Mykonos town.

For the last 20 years she has been teaching the art of mosaics to adults and children.
Since 2010 she has participated in a program that takes her to the small and out-of-the-way islands of the Cyclades and the Dodecanese educating students in schools.

Irene maintains the ancient tradition of cutting the mosaic tiles by hand. Every tile she uses is cut individually one by one. From its Inception until modern times, Mosaic Arts is a craft based in the recycling of materials.

She has participated in international and local competitions.
Her works are in public spaces as well as being personally collected by individuals from Greece, the United States, France, Canada, Italy, Germany  and Australia.

Her work is also available in museum shops. 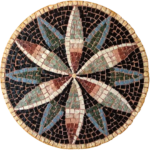